I've read some really good historical novels recently.  "Lilac Girls" and "The Edge of the Orchard" are so well-written that, for good or ill, you're right there living with those folks.  So imagine my surprise when my library suggested, "If you liked those, you'll like these", and popped up with one about the sinking of the Lusitania, and it turned out to be a real dog.

This is one of those pieces of history that I thought I knew about and now realize that I had the Lusitania sinking confused with the much more benign (but equally tragic for the families of the lost) sinking of the Morro Castle off the US coastline.

The recommended book was well-researched, but the writing!  Oy, the writing!  Why didn't the mainstream publisher have editors to point out that one doesn't write a WWI novel with the characters speaking in modern-day vernacular?  Two of the female main characters were named "Brooke" and "Sydney", fergawdsakes, and not a person in the entire story commented on the oddness of those names.  At one point somebody stood up too abruptly and "got a rush".  The shipboard romance of these Victorian-era characters leads them, unchaperoned, to the guy's bedroom, where they promptly fall into bed together and do what no couple of those times would dream of doing until they were married.  Clearly, the thing was written with "Hollywood" in mind.  Not sure if the writer realizes it's been done already, but of course that never stopped Hollywood, grrrr.

OK, flash forward to the end of the book and the acknowledgements and so forth.  Yes, the author is "award-winning", but what she's winning awards for is made-for-television scripts.  She's been on Oprah. She's a Name, it seems, and that will sell books.  Never mind if this person, who might be quite talented in modern writing, is utterly unsuited for a trip back in time.  I'm not sure if she ever read a book written before 2001.  Or whether the editors, who work for one of the 2.5 presses that's gobbled up all the small presses and wiped out the rest, have either.

I guess if you have a near-monopoly on the publishing business, you don't need to worry about the quality of what you print.  Which is what the small presses were warning us about 25 years ago.  Back when there were also independent bookstores to vet the many and varied offerings from talented writers.

OK, end of rant.  But "Edge of the Orchard" is a wonderful read, by the author of "Girl With the Pearl Earring".  At the end I learned that the name of one of the characters is the name of a modern-day person who won a fund-raising competition, the prize of which was to have her name used in this  swell book by a swell author.  Rush to your library, bookstore, or wherever, and snatch this one up.  You'll end up knowing more about apples than you ever intended.
Posted by Becky Thacker at 8:13 PM No comments:

Far better writers than I have suggested the "wait a bit" method of editing.  Write your story, run it through a tidying-up edit run (or two!), then put it in a drawer for a few months.  Bring it out after you've had time to move along in your thinking, and run through it again.

Still look decent?  Fix the typos and sloppy bits.  Now you're ready to share it with a few reasonably objective friends or relatives.

OK, so I don't follow this strictly.  But still, here I am a little under a year later, having another look at "Five Dollars and An Axe", the sequel to "Faithful Unto Death".  No murders in this one, but lots of good detail about life on the farm just before and during the depression.  Ralph continues to be quite a fellow to be admired (as indeed he was).   Scandals?  You bet.  Hardship?  Plenty.  Grasshoppers?  Yep.

U of Michigan is no longer accepting any new fiction submissions, which is a little upsetting.  Call me old-fashioned, but I just don't wanna self-publish.  Who do you have to sleep with to get an agent?  Why does one have to jump through a mess of hoops just to hire someone to peddle a manuscript to one of the mega-publishers?

Gotta still be some good independent publishers around! 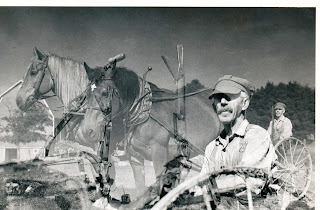 Ralph in the later years. 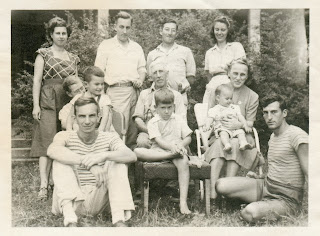 Hattie, Ralph, Josie in chairs, various descendants and spouses gathered around.  Wonder who took this photo?
Posted by Becky Thacker at 8:24 PM No comments:

Go here to order your copy.  Or even better, go to your friendly local independent bookstore and ask them to order you a copy.  Get one for your mom while you're at it.  She might surprise you.
Posted by Becky Thacker at 5:30 PM No comments: 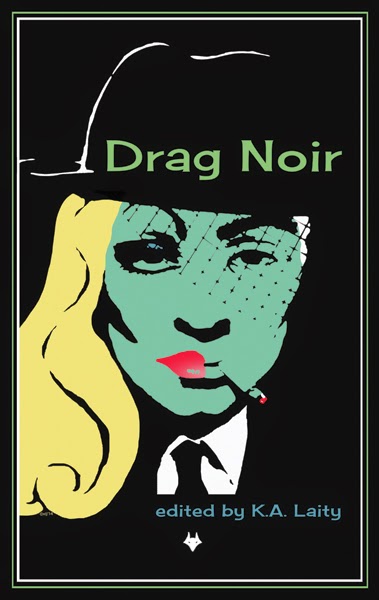 Almost forgot!  Here's the cover.  Why does it make me think, "Michael Jackson"?

Posted by Becky Thacker at 5:27 PM No comments:

Go get yourself a copy of "Drag Noir"!

It contains a lot of well-written stories; granted, some are pretty dark  (what can you expect with "Noir" in the title?) but all have interesting twists on top of the gender-bends.

Good stuff, if I say so myself.  My story is somewhere in the middle of the thing.
Posted by Becky Thacker at 5:23 PM No comments:

Gonna be at IHS this week for juried Holiday Author Fair

The event is this Saturday, noon until 4:00 pm at the Indiana Historical Society (near the corner of Ohio & West St).  There are about 30-40 selected authors at the event, all based in Indiana (most but not all of the books focus on Indiana history--hey, midwest is close enough, right?).

This is their big Holiday "do", should be fun!
Posted by Becky Thacker at 3:50 PM No comments:

We spent part of a day meeting and greeting other authors and the public.  There are a LOT of self-published Christian writers and they all appear to have attended this event.  Plus a few actual writers who had some good stuff to show.  (Meeyow!  But still....) 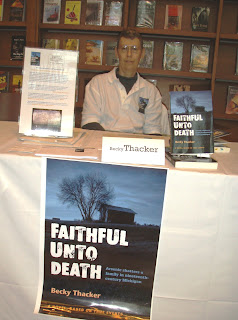 Unfortunately we didn't realize until too late that the library copy of "Faithful" was right on the rack behind me, in "New mysteries"! 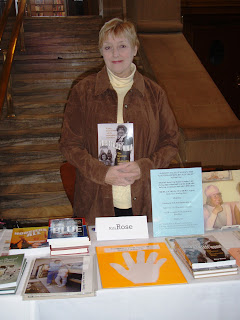 Rita Rose, who wrote a delightful teen book about the world's tallest woman (who lived in rural Indiana), was in attendance.  Book review reads,
Sandy Allen was the Guinness Book of World Records holder as World's Tallest Woman seven feet seven and 1/4 inches. Sandy died in August of 2008, after having helped with her friend's book about her high school years--and how she redeemed them through a life of service to young people. This book is an inspiration and insight into the life of different; people this one a lively, bright and interesting lady who scorned the title of freak and lived out her life in dignity.
Show More
Show Less
Great book, and I recommend it to adults as well as teens. 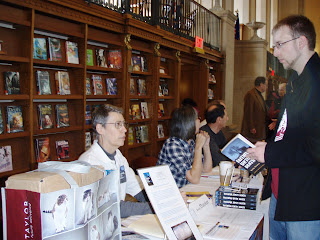 Chatting about arsenic poisoning.
Posted by Becky Thacker at 1:13 PM No comments: